A very detailed and well-told story about his adventures and misadventures in creating dinosaur models in England and the United States.  It is packed full of great information.

It’s a long book, but it held my young son’s interest.  The illustrations are spectacular (2002 Caldecott Honor Book).

It was a lot of fun pulling our pop-up book off the shelf and showing my son the pop-up version of the scientists eating dinner in the iguanodon.

This is the story of Mr. Waterhouse Hawkins who was an artist and lecturer about dinosaurs during the mid-to-late 1800’s.  He had fascinating experiences being one of the first people to creating life-size models of dinosaurs.

He helped to build dinosaurs for the Crystal Palace, created an iguanodon for scientists to dine inside, lectured in New York City, attempted to create models for a museum that was planned in Central Park (but was thwarted by a corrupt politician), created dinosaur skeletons for Princeton University and the Smithsonian, and finally headed back home to England.

Our Experience Reading this Book:

My son likes dinosaurs, but he’s not overwhelmingly in love with them.  So far, what flops his mop is construction equipment and vehicles.

That being said, it was wonderful reading this book to him.  It is a fascinating book and I was surprised by what I learned.

My son found the book interesting and sat through it without a problem.  He had a couple of questions and then he asked for a different book.  I think he’ll really enjoy it when he’s just a bit older.

What really surprised me, was that a few nights later at dinner he started asking me questions about Mr. Hawkins.  It took me a moment, because I wasn’t expecting him to talk about this book.  We had only read it once.

After the back and forth of me trying to figure out who in the world he was talking about, he finally shouted, “The dinosaurs!!!  Mama, you remember!”  At which point, I said in disbelief:  “You mean Waterhouse Hawkins?”  At which point I filled my husband in on the drama that had just unfolded and we got down to business talking about this book.

After dinner we read the book again as a family.  It was fun.

The Dinosaurs of Waterhouse Hawkins is a very well-told story that can hold the interest of young children and adults alike.  Dinosaur lovers or dinosaur likers can both enjoy this book and come away with a new perspective.

Some of My Favorite Reviews of this Book:

FTC Disclosures:  Some of the links in the post above are “affiliate links.” If you click on the link and purchase the book, I will receive an affiliate commission.  I am disclosing this in accordance with the Federal Trade Commission’s 16 CFR, Part 255: “Guides Concerning the Use of Endorsements and Testimonials in Advertising.” 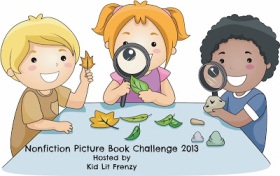 Nonfiction Picture Book Wednesday is hosted over at Kidlitfrenzy.com.

I’m also participating in the Nonfiction Picture Book Challenge 2013.  I’ve set my goal for 25 books.  This is book 5 of 25 since signing up for the challenge.