I am so excited to present to you an interview with Paul Czajak!  He has generously taken the time to answer my seemingly endless questions!  He has some great suggestions, advice, insight, and some wonderful stories to share about writing picture books. I hope you enjoy!

My family loves reading your books!  The only controversy we’ve had is:  How do you pronounce your last name?  Could you please settle this once and for all?

First and foremost thank you for the interview and for reading my books! As a writer it is always great to hear that people are reading your book and that they like it!

Ok, to end the controversy. The way I pronounce my name is “SAY-JACK”. But, just to add a little of my own controversy, since the name is Polish the correct Polish pronunciation is “CH-eye-ACK. How and when it was changed, I have no idea. Though I’m sure it had something to do with Ellis Island.

How goes the transition from chemist to picture book author?

It is very different! I was working as a chemist for 21 years with the same company. I loved the people but the work started to change. My family decided to make the move to New Jersey so I figured this was the perfect time to try my hand at writing full time. I definitely get more writing done, but I miss the interactions with all my friends and co-workers. I figure I will give it a year or so to see if it works. If not, I can always go back to science.

How did the idea of your recent picture book, Seaver the Weaver, come about?

I have to give the credit to my brother-in-law and his wife for giving the name Seaver to a spider living outside their window. I thought it was such a great name, Seaver the Weaver, but at the time I had no idea what kind of story it would become.

It wasn’t until several months later when I was working in the garden and I saw this huge web and and an orb spider right in the middle. Then I noticed there had to be five more webs right next to each other, all with orb spiders in them. All of them were that perfect quintessential round web, except for one which happened to be broken, and that’s when it hit me. Seaver didn’t want to weave a round web, he wanted to do other shapes.

At first when I wrote the story, I was really only thinking about how teachers would like the geometry angle of the story. But then it became so much more. It wasn’t until after it was complete did I see all the different layers to the story: inspiration, being yourself, being creative, dealing with peer pressure.

From Seaver the Weaver. Images Courtesy of Mighty Media Press.

In general, once you have an idea for a picture book, what do you do to expand it?  Or are you finding that you don’t have a set method?

With the Monster & Me series I do have a set method since every title is MONSTER NEEDS something. So I first figure out what he needs. For example, in Monster Needs A Party, Monster needs to have a party. Next, I ask myself why does he need it? It’s his birthday. Then comes the conflict, why can’t he get what he needs? In the case of PARTY none of his friends can come, or at least that’s what we are led to believe, so they go to the Amusement Park to cheer Monster up. Finally the resolution, Monster comes home to find a surprise party waiting for him.

Usually when it comes to these Monster books, I figure out the title first and then the resolution. Once I have those, the middle usually writes itself. 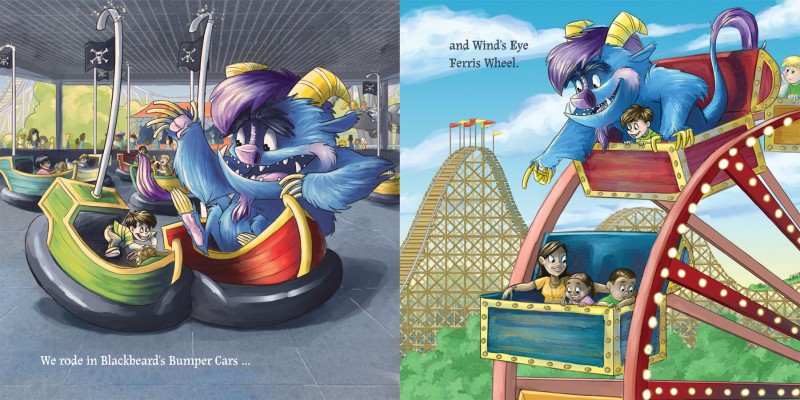 Now when it comes to books like Seaver the Weaver, those are much more organic. I may start with just a line that I heard someone say or in the case of Seaver the Weaver a name. Then the story usually grows from there.

Sometimes it takes months to understand what story I’m writing, and in other cases it takes a day.

I recently wrote a story called Who you Call’n Chicken, about a chicken who keeps doing all of these crazy dare devil type stunts to prove to everyone she isn’t chicken. But everyone keeps calling her chicken because, after all, she is a chicken. It took me hours to write because the whole story hit me at once and I couldn’t stop laughing as I was writing it.

What made you want to write picture books?

Ultimately it was my kids saying and doing things that gave me the ideas. Mixed with my wife getting sick of me saying, “Man that would make such a great picture book.” She finally said, “Just write it already and shut up about it!”

What were some of your favorite picture books as a child?

When I was a kid I loved the Berenstain Bears, especially The Bears’ Picnic. The image of the mosquitoes was burned into my brain!

In fact, it made such an impression on me, when I wrote a story about Monster going camping I had this image in my mind when he deals with a swarm of mosquitoes.

Monster bounded through the trees, but then came running back.

Mosquitoes swarmed on Monster and then started their attack!

The first story I wrote was called Abigail the Dinosaur. It was about a little girl getting over her fear of insects by pretending to be a dinosaur whenever she comes in contact with a bug. It was based on my daughter who used to run around the yard roaring at bugs to scare them away. It hasn’t been published yet. I love the concept of the story, but I need to go back and apply what I have learned from writing the picture books that have been published.

What do you hope that people will get out of your books?  Is there a particular message that you hope people will grasp when they read Seaver the Weaver?

As long as they get something out of it I will be happy. That being said, I love the message of thinking outside the box, in this case the orb. It was something that I did when working in chemistry when faced with an unusual problem to solve.

Sometimes a set protocol doesn’t always work and you shouldn’t be afraid to try something new.

How long did it take for you to write Seaver the Weaver?  What did you enjoy about the process?

That one took me a few months to write, and to get right. It was all in the revisions. Cutting the right text and simplifying the story so that all of the different underlying messages could come forward.

You also have Monster Needs a Party coming out next month!  Not to be greedy (because my family really enjoys your books), but are you working on more picture books?  Any future plans?

By all means be greedy! When it comes to books, greed is good!

In November of 2015, Monster Needs Your Vote will be out. As for next year I’m not sure which Monster books will be published. I think Monster Needs a Hug might be in the spring of 2016.

I’ve written 17 different ones so it’s up to Mighty Media which ones they go with, hopefully all of them! See greed is good. They are also working on plans to do Monster & Me board books as well as extra online content, which is keeping me very busy.

As for other non-Monster related books, I have written several that I really like. My agent, Uwe Stender, is working on selling them, so fingers crossed!

Finally, what do you think has been helpful in teaching and helping you learn how to write for the picture book format?

I can’t talk highly enough of the Society of Children’s Book Writers and Illustrators (SCBWI). The conferences and workshops that I have attended and the contacts I have made through them are invaluable.

Also, I would be nowhere without the critique groups that I am a part of. My meet up and online groups are awesome and provide such great feedback.

If you are a children’s book writer or illustrator, and you are trying to get published without being a part of either a critique group or the SCBWI, then you are not doing yourself any favors.

Thank you so much, Paul, for chatting with me.  I really appreciate you taking the time to answer my questions!

You can find more of Paul’s books on [Affilitate Link] Amazon.com, your local bookstore, or your nearest public library. Also, check out his website at paulczajak.com.