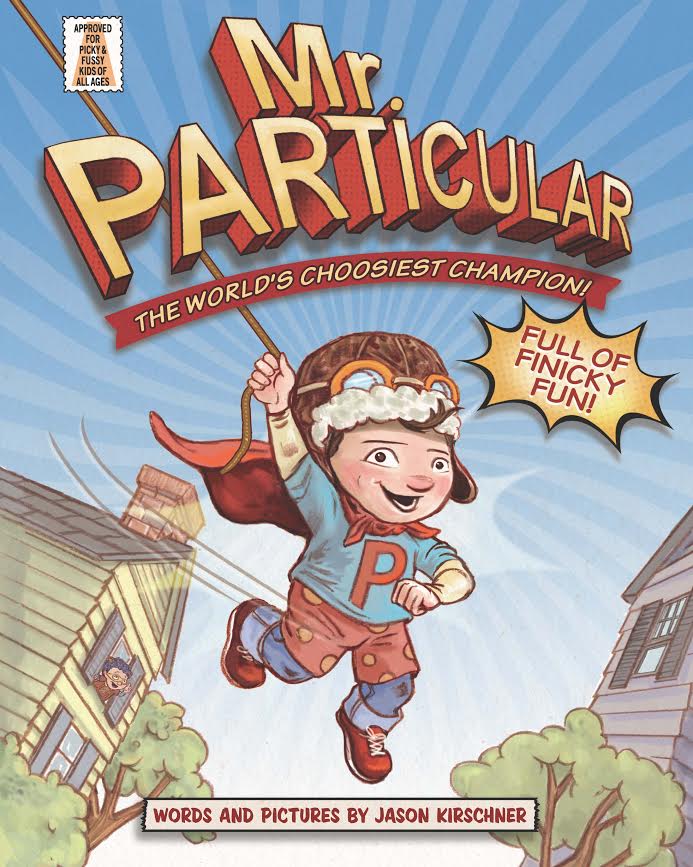 Mr. Particular: The World’s Choosiest Champion is a fabulously action-packed graphic-novel styled picture book with retro-esq illustrations. It is an entertaining and delightful plea for people everywhere to examine their particularities, keep what’s helpful and discard what isn’t.  It has a great message of how we should balance improving ourselves with being true to ourselves.  If you do, you might just find that your real super powers can shine through.

Inside a delightful-yet-unassuming house resides the greatest hero of our age — Mr. Particular!  This guy can do it all.  He can lift (toy) minivans, run faster than a train (at the zoo), and be in bed by 7:30 pm (that’s my kind of superpower)!  He only has one major issue — he, “liked things the way he liked them — and only the way he liked them.” (Don’t we all?) But this major issue comes with a very specific set of particularities:  No humming, all non-dessert food should be served with ketchup, all shirts must be untucked, nothing coconut scented, no squishy mud or oatmeal, and all things green are by default gross.   Fair enough.  We’ve all got our quirks.

The only real problem with his particularities is that is often gets in the way of him and his friends, Atomic Bear and Robotosaur, from saving the world from the baddies like, Kickin’ Chicken and Dr. Slimyhands. (I love the superhero names!)  Mr. Particular’s particularities turn out to be so prohibitive and detrimental to the superhero group being able to save the world that they call a meeting and vote Mr. Particular out of their group and replace him with the newly-converted Dr. Slimyhands.  (Ouch, but you can see where they’re coming from.)

Mr. Particular is rather and understandably upset and returns to his fortress to do some thinking.  He earnestly resolves to mend his ways and be less fussy — but old habits die very, very hard.  He tries!  Oh, does he try!  But he fails and fails and fails.  Kudos to him for attempting (and attempting and attempting)!

He finally admits defeat to himself and resigns himself to spending the summer with his little brother, Super Pooper.

Just when we’re sure all is lost and that Mr. Particular is going to have a very bad summer with his baby brother, he hears cries that Atomic Bear is in danger and no one is helping him!  He rushes and races to his aid, but stops short of a seriously muddy pit.

All of the superheros that just voted him out of the club are standing around watching this kid dangle from a limb over a muddy pit and not doing a thing!  These kids are highly suspect.  Mr. Particular wonders if Atomic Bear is faking and contemplates if spending the super with Super Pooper really would be all that bad, but then he decides that he’s going to go for it.  The other kids cheer him on!  His pushes past his hatred of squishy mud and frees Atomic Bear!

Do you know why those other kids were just standing around doing nothing while another child dangled from a limb?  Because Atomic Bear was right next to a beehive and they were all too scared to get near it.  Nobody mentions this to him on his way to save Atomic Bear — they all apparently have no problems whatsoever putting this kid into harm’s way.  (My eldest didn’t notice any of this, he was literally too on the edge of his seat wondering what would happen next.)

Mr. Particular might not like squishy mud, but he clearly has no problem with bees.  He’s enlightened and, to his knowledge, not allergic.

He saves Atomic Bear and immediately forgives and is forgiven and rejoins their group!  He’s now a changed boy and, with the exception of things that are green, is ready to help them battle all the baddies.  Because while some things are quirks, some things are just common sense and vital for self-preservation.

Yes!  This is such an entertaining picture book to show people the power of loosening up a little without compromising yourself.  We’ve all got our quirks, but it is important to make sure that you don’t let them get in your own way.  Mr. Particular is great voice to add to this message.  It’s also a great message for everyone to hear that even if you have some flaws, you still have some important strengths and you shouldn’t dismiss yourself simply because you’re strengths and weakness are different than other people in your life.

And all of these important messages and morals are conveyed in a daring, action-packed, picture book that is so much fun to read with everyone.  It’s a win!