[Reviewed from copy received courtesy of That’s So Enterprises] 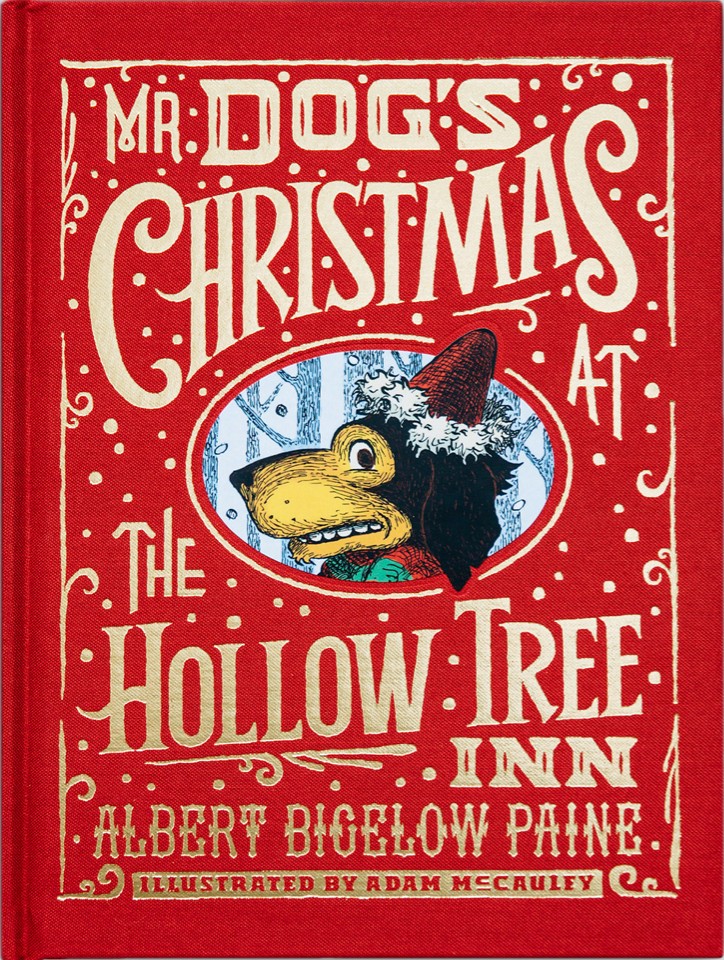 Originally written in 1898 by Albert Bigelow Paine (before he became famous for being Mark Twain’s biographer) comes a sophisticated, picturesque, and boisterously merry (read: hilarious) Christmas story.  Mr. Dog’s Christmas at the Hollow Tree Inn is a holiday treasure and a true delight — told in a rich, conversational tone with captivating illustrations, it effortlessly whisks its readers away to an enchanting world and a bygone era.

Mr. Dog’s friends: ‘Coon, ‘Possum, and Crow know about Christmas, of course, but until now, they’ve never heard of Santa Claus. Mr. Dog knows all about Santa Claus because he lives with Mr. Man. He knows that each year on Christmas Eve Santa Claus comes and puts a surprise into the children’s stockings.  One year, Santa even brought him a bone. 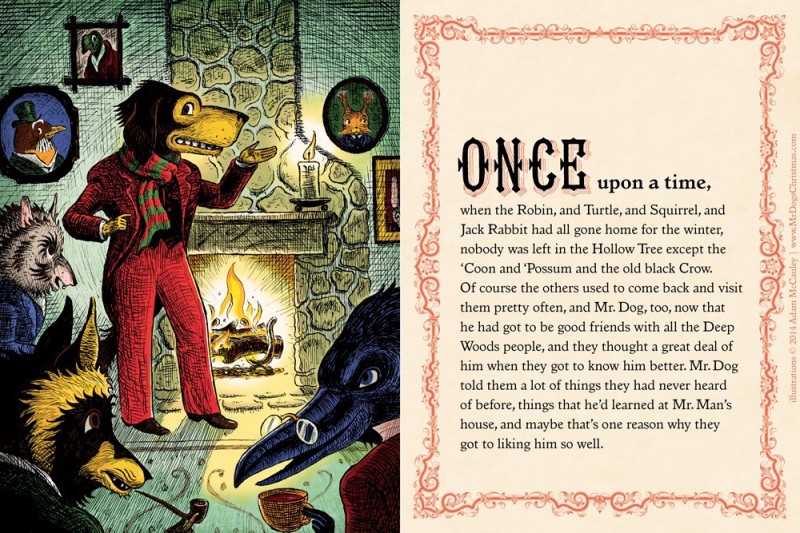 When he tells his friends about Santa Claus, they get very excited.  They decide that they’re going to put out their stockings so that Santa will come and bring something for them, too. Mr. Dog thinks that idea is very funny because he knows that Santa only goes to the human’s homes – not to other animals’ homes.

He gathers gifts — three tender young chickens, new neckties, a big striped candy cane, and a new pipe and package of tobacco for each of his friends.  (When I asked my kids if this is what Santa should bring them for Christmas, I got a resounding NOOOOO!)  He dresses up as Santa and then heads back to the hollow after he thinks his friends are asleep.

Quietly, he sneaks in and successfully delivers the presents.  But once that’s done, he realizes that he is so very, very tired and the next thing you know, he’s fast asleep at his friends’ home in their rocking chair decked out in full Santa Claus gear.

It isn’t until they all wake up in the morning when everyone has a great surprise and a great laugh!  This story has such a sweet, gentle and congenial ending that it reminds the readers how romantic and fun the holidays can be.

Mr. Dog’s Christmas at the Hollow Tree Inn is a book lover’s book.  The bright red cloth cover with bold gold title, the glossy pages with large bold text, and the exquisite cross hatch prints with deep hues of traditional holiday colors exude a luxurious and authentic holiday ambiance.  It’s such a gorgeous physical book that you use it as holiday decoration in and of itself.

Reading this story to my sons is a lot of fun.  I wondered how they would respond to the story since they are so young and the story is not written in a way that my children are used to.  The vocabulary and sentence structure is complex and indicative of the time it was written in.  It didn’t seem to phase either of them.  They were, no doubt with the aid of the impressive illustrations, enamored with the story. My eldest son jumped up and down and laughed in suspense when Mr. Dog sneaked off to deliver the presents.  My youngest son joined along and asked lots of questions about the story.

Some of the elements, like the pipe and tobacco in the story, were a lot of fun to explain to my sons.  I enjoyed talking to them about Christmas gifts I received as a child and my eldest wanted to know what kinds of gifts people used to get a “long, long, long” time ago. We took a few breaks while reading the story for the first time to look up a few things — like what a latchstring is and how long people have been drinking coffee and why people made their own stockings instead of buying them.  Random, small things that made for a great experience.

I have not read a holiday book quite like this one. While it is about Christmas, and it was written in 1898, I was surprised that there are no religious themes or elements to it.  It focuses on celebrating the blessings of friendship and the joys of spending time together.

Mr. Dog’s Christmas at the Hollow Tree Inn is a stunning work that is a joy to read and a welcome reprieve from the hustle and bustle of our modern holiday season.  I look forward to enjoying this book with my family for many, many Christmases to come.

Where Obtained:  I received a review copy from the publisher. No other compensation was received.  I am disclosing this in accordance with the Federal Trade Commission’s 16 CFR, Part 255: “Guides Concerning the Use of Endorsements and Testimonials in Advertising.”