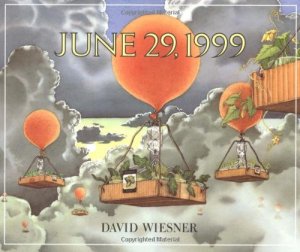 The Short:  My son pulled this book off the shelf this morning and asked me to read it to him.  I then reread it to him three times.  We both really enjoyed it.  So far, we’ve loved everything by David Wiesner and this is no exception.  We highly, highly recommend it.

The Long:  This story is about a girl who performs a science experiment.  She plants vegetable seeds and attaches them to balloons with a very intricate and complicated watering/feeding system and sends them into the atmosphere.  (I’m sure the Department of Agriculture wouldn’t be thrilled about this idea.)  A little over a month later people all over the United States start finding incredibly large vegetables.  At first Holly thinks that this is the result of her experiment, but then she notices that many of the vegetables were not the ones that she sent up.  She is curious as to where the vegetables are really coming from.  In the end we find out that aliens were orbiting Earth and one of the aliens accidentally dumped their food supply.  The aliens aren’t sure what they’re going to do for dinner when they find Holly’s vegetables floating towards them.

Sometimes I am hesitant to read such fantasy to my son because I have no idea how this will shape his view of life and the world.  I hesitate for about two seconds before I figure, eh, the worst case is I have to reexplain things to him.  My hope is that reading all these  fantasy books simply encourages a wild and wonderful imagination.  Because if I have my druthers, I’ll take an overactive imagination to a limited one.

As far as the book — the illustrations are great (as always) and there are some wonderful details thrown in.  In about the middle of the book the girl has a Star magazine with an alien on the cover.  At the end of the book you see that the aliens on the cover are the ones orbiting Earth.  A nice, subtle detail that I didn’t catch until about the third time I read it.

My son was pretty funny after reading this book.  He shouted, “TURNIPS!” a few times.  I was impressed by his imitation of me reading this book.  He wanted to know where the zoo was when I read about the cucumbers circling Kalamazoo and I attempted to explain to him that Kalamazoo was a place and it wasn’t a zoo.  He wanted to know what the eggplant was and asked me if we liked eggplant.

So far, my son eats most everything.  He’s pretty good about eating his vegetables and seems to like broccoli, spinach, and brussels sprouts.  Cabbage seems to be one of his favorites these days.  I’ll have to get some turnips soon and then reread this book with him.  I think my son will get a kick out of it.

It is fun reading this book and it does a good job of promoting vegetables without preaching them.  I like the twists and turns that the story takes.  It’s an easy book to love and highly recommend.

FTC Disclosures: Some of the links in the post above are “affiliate links.” If you click on the link and purchase the book, I will receive an affiliate commission at no additional cost to you.  I am disclosing this in accordance with the Federal Trade Commission’s 16 CFR, Part 255: “Guides Concerning the Use of Endorsements and Testimonials in Advertising.”