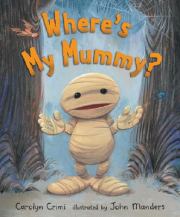 Halloween is coming up.  This will by my kiddo’s first year trick-or-treating.  I think we’re going to dress him up as an excavator or some kind of construction vehicle.  We’ll see how it all works out.  If all else fails, maybe I can wrap him in toilet paper and call him a mummy?

We’ve been reading some Halloween-themed books these days.  Where’s My Mummy?  is one of his current favorites.  This book is about a little mummy that plays hide-and-seek with his mother, except after waiting for awhile, his mother doesn’t show.  He, of course, does what any rational child would do and heads into a dark, creepy forest to search for her.  He hears some strange noise and thinks it is his mother. When this happens, instead of his mother out pops a skeleton, next a glob-type creature, and then Dracula.  Each time one of these creatures pops out, instead of being scared he just says, “You’re not my mummy!”  Each creature tells the little mummy to go to bed because there are creatures out there that can harm him.  He responds by telling them that he isn’t scared.  Finally, he hears a noise and out pops a mouse.  This naturally scares him and he calls for his mother.  She, being a good mother who doesn’t let her child wander out into the creepy forest alone, is right there and she scoops him up, brings him back home, and puts him to bed where he falls fast asleep.

It’s a cute book.  For my son this is a very active book.  He will sit right next to me as I read it and then when the scary creature is going to come he runs to the other side of the couch.  Once I’ve turned the page and read, “You’re not my mummy!” he comes back to me and repeats this process for the entire book.  Then he asks for me to read it to him again.

It seems to give the appropriate amount of suspense for a two year old.  I like how it promotes not being scared and it is amusing when the little mummy is scared by a mouse.  I think this is a great book to read to a two year old for Halloween.  I didn’t feel the need to edit or censor anything for my son.

We’ve read several books by Carolyn Crimi and she’s quickly becoming a favorite.  So far everything we’ve read by her my son has loved.  I’m certainly impressed.

The illustrations are great!  John Manders illustrated Henry and the Buccaneer Bunnies, Henry and the Crazed Chicken Pirates, and Minnie’s Diner (which are all books that I really like).

We’ve read and reread this book so many times, I think I’ll have it memorized by Halloween.

FTC Disclosures: Some of the links in the post above are “affiliate links.” If you click on the link and purchase the book, I will receive an affiliate commission at no additional cost to you.  I am disclosing this in accordance with the Federal Trade Commission’s 16 CFR, Part 255: “Guides Concerning the Use of Endorsements and Testimonials in Advertising.”