Once upon a time, in a kingdom far away, a young princess fell ill.  She knew that the only thing that could cure her were three perfect May peaches. Her father decreed that the one who found the peaches that made her well could marry her.  All the young men lined up with peaches for the princess, but not one was perfect.

Out in the country a young man finds picks three perfect peaches from his peach tree.  As he journeys to the castle he comes upon a woman who asks what’s in his basket.  He’s rather rude to this woman and tells her that he has rabbit droppings in his basket.  She says, “Very well… Rabbit droppings it is, then.”  When the young man gets to the castle and presents his peaches to the princess he finds that he, in fact, has rabbit droppings in his basket.  He is abruptly escorted out of the castle by the guards.
The next day, his younger brother goes through the same experience.  The following day, the youngest brother picks four peaches and when the woman approaches him, he says that he has perfect May peaches and he’s going to marry the princess.  The woman says, “Very well.”  He then offers her one of his peaches.  She in turn gives him a magic whistle that will give him whatever he wants.  If he ever loses the whistle, he only needs to clap his hands three times and the whistle will return to him.
The youngest brother arrives at the castle and presents his peaches to the princess.  Sure enough, she eats them and gets better.  The king is mortified that he will be marrying his daughter off to a poor country boy and attempts to thwart this by making the youngest brother perform an impossible task. Fortunately, the youngest brother has his whistle and is able to overcome his task.  The king then tries to get the whistle from the boy. Each time the youngest brother hands over the whistle but is able to get it back later by clapping his hands.
Finally, the king declares that as the youngest brother’s last task he must, “Fill a bucket to overflowing with truth.”  The boy agrees and begins asking how people were able to get the whistle from him. The king doesn’t want to confess what he did for the whistle and declares that the young man has filled up the bucket.  The story ends with the youngest brother and the princess getting married in May.

Our Experience Reading this Book:

I love, love, love this book. I highly, highly recommend it! It is hilarious! I laughed so hard. It is magical, fun, and creative. It’s a long story. There’s a lot to it and there’s a lot of text to read for a picture book, but it is so much fun! I couldn’t imagine it being any shorter – it is truly a perfect picture book just the way it is.

I haven’t given away the best parts of the story in the summary, so you’ll have to see for yourself how funny it is. I was shocked by some of the events in the story – but in a good way. It’s scandalous but never inappropriate.  The young man’s humor and cleverness is admirable.
My son laughed quite a bit when I read this story to him and there’s not a single sound effect in it.  (He has a weakness for all things onomatopoeia.)  The humor in this story has many layers to it making it fun to read to him now, and it’ll be fun for him to read later on.
The illustrations are beautiful.  They are done in ink and watercolor.  Trivas’s illustrations bring the story to life and give it a timeless feel.  The illustrations match the tone of the story perfectly.
Cynthia DeFelice wrote another one of my favorite picture books, One Potato, Two Potato  and so I decided that I would check out all of her books.  I’ve been so impressed with her writing.  I tried to find more books by Mary DeMarsh, but have been unable to find any.  It’s a shame because this book is fantastic.  Irene Trivas has illustrated an impressive number of books including a couple by Judy Blume.
I am disappointed to see that this book is no longer in print but there are several used copies. I do hope you’re able to find this book and read it.  It’s so much fun.
Themes/topics: Fairy tale, politeness, consideration, cleverness, resourcefulness, and honesty.
Opening Sentence:  “Long ago, in a faraway kingdom, there lived a red-haired princess who had a freckled face, a kind heart, and a clever mind.”
Synopsis: Sick princess needs three perfect May peaches. Father promises whoever can cure daughter can marry her. Boy cures her. Father tries to go back on his promise by making boy preform some tasks.  Boy outsmarts father.
Where Obtained:  First, the library and then I purchased it online.
FTC Disclosures:Some of the links in the post above are Amazon affiliate links. If you click on the link and purchase the book, I will receive an affiliate commission at no additional cost to you.  I am disclosing this in accordance with the Federal Trade Commission’s 16 CFR, Part 255: “Guides Concerning the Use of Endorsements and Testimonials in Advertising.”

Some of My Favorite Reviews of this Book: 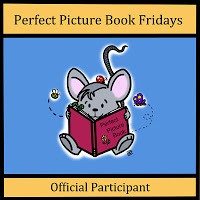 I’m sharing this post with Perfect Picture Book Fridays over at Susanna Leonard Hill’s fantastic blog!  Her website is an incredible resource for picture book reviews and all things children’s books.  I’m always impressed at what I find on her site.  Please take a moment and check it out.